What if finding your next career involves not committing to anything….yet 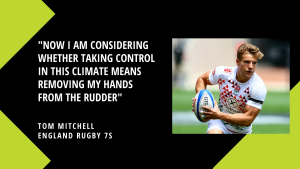 I fell into the covid crisis with a bump. A fever, fatigue and a few weeks quarantine preceded the official government lockdown. My relatively mild engagement with the virus followed two exhilarating weeks away with the England 7s team in LA and Vancouver during which time we took part in two exciting world series tournaments. My career was tracking nicely and my performances were building as we moved towards the pinnacle of the sport waiting for us in the summer, the Olympic Games.

In the space of a few weeks the regular season was cancelled, the Olympics postponed and all team training had ceased. Given that I was ill, even my own personal training was on pause so all around me things were either disintegrating or grinding to a halt.

Rugby has of course been on pause ever since with any 7s competition barely visible on the distant horizon, a horizon that’s very hazy and seems to be retreating. I am somewhat adrift in a boat with my fellow players and the metaphor of drifting seems to be an accurate one.

But what if being subjected to the whims of the current is not such a bad thing? In the discourse about career transition we often emphasise the importance of taking control of your situation and being proactive.

We are in a world of ever-changing restrictions, industries polarised into a covid boom or bust, and a ‘spin the wheel’ method of predicting the future.

To consciously relinquish control of our lives is uncomfortable. Sometimes there is nothing more reassuring than firing out a load of LinkedIn messages, spending a day polishing a CV, or building a detailed plan of how to get into a particular job role. These are undoubtedly useful tasks at the right time. But I question whether that time is now.

It has been distinctly uncomfortable spending days away from the laptop and phone because in the back of my mind I know I will be jobless in a month’s time and that perhaps my rugby career is over (or at least on hold until further notice – a notice given by external powers). However, reflecting on the months that have passed, it is this space from the full-charge of career planning that has been the most informative. It has allowed me to see myself more clearly. I have been able to separate out the things I want to do for myself rather than what I feel obliged to do. I have pursued things that I otherwise would not have. Some things, the online psychotherapy course and the books I’ve read for instance, may prove useful in future careers whereas others, the hours I’ve spent practising my juggling, may not!

Of the many lessons that the covid-19 pandemic has offered society, the most obvious has to be the way in which it has revealed our lack of control over large parts of our lives. This is true on many levels; the fragility of our physical health at the hands of a powerful virus; the frail economy and infrastructure in which we operate; our inability to influence power systems which grip our lives. But on the micro level this has been true of our jobs. Many 7s players, who did everything impeccably to flourish in their careers, are experiencing the opposite outcome.

So taking a step closer to the reality of our time might mean we must indulge a relinquishing of control in the usual sense. Even as I write this the voice in my head is calling “Bullsh*t! Get your head down and secure a job!”

But by allowing this voice to just sit and not dictate my every move, I think I am getting closer to a more positive outcome

For one, I am freeing myself from the emotions of desperation that echo through the tone of this thought process. But from a more pragmatic point of view, I am remaining flexible and adaptable. I could have ferociously scoured the job market upon realising I would need a new role and, perhaps optimistically, I think I could have landed something. In doing so, however, not only would I have foregone the benefits of ‘drifting’, I would also have jumped into something that might not be right for me. Or more likely, would have missed things coming up that as the world adapts, might be a better long term fit.

For the next month or so, I will try and spend more time with my hand on the rudder endeavouring to explore further. And I might have got this all wrong. I might look back and wish I had been a bit more deliberate with my movements. Therein lies the courage of what looks like passivity. For now, I am glad I didn’t seek to land at the first available port. When cast adrift, it might be time to worry less about the direction you’re sailing in. It affords us time to see the horizon more clearly.

Tom’s keen to speak to those of you seeking performance/leadership/mental resilience coaching. You can get a hold of him on:
– LinkedIn
– Twitter
– Instagram
Members click here to discuss Tom’s post on our message board
Back to News